Tom's Dixie Kitchen in the Life of Pancho Villa 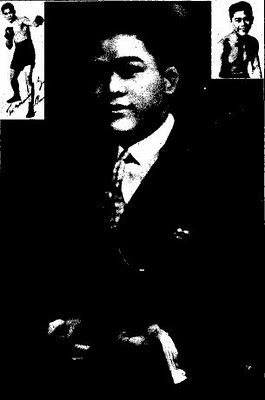 "A roar of laughter in Tom's Dixie Kitchen, Manila,'' wrote Bill Miller in the January, 1925 issue of The Philippine Republic, "made Pancho a champion of the world."  Miller was formerly with The Manila Daily Bulletin as sporting editor.

The Kitchen's patrons that day--boxing fans, sports writers and businessmen--thought Frank A. Churchill's optimistic and honest statement that  "a Filipino is going to be a world's champion someday" quite ridiculous. But really, "he was positive that the Filipino boxers were far enough advanced to compete with leading American and European ringsters."

Churchill was Pancho Villa's manager.  Around that time, the only Filipino boxer of note was Dencio Cabanela, who, unfortunately, met an untimely death. To Pancho, Cabanela was "The King."

The ridicule spurred Churchill to bring Pancho Villa and Elino Reyes to the United States in 1922.  "Thousands of dollars were spent," Miller wrote, "in bringing over these boys and getting them started in the American ring."  And that was considered something very crazy.

Frank A. Churchill was vindicated at last.  His wild yet optimistic forecast at Tom's Dixie Kitchen that was ridiculed bore a Filipino champion who would be enshrined in Halls of Fame in the boxing circuit, and whose legend continues to inspire until today. 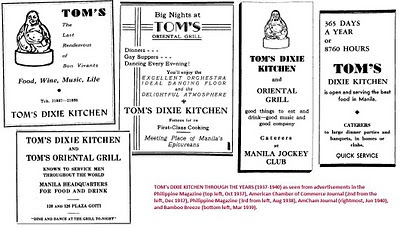 Tom's Dixie Kitchen outlived Pancho Villa.  The owner, Thomas Pritchard, a Jamaican black man, came to Manila in 1911, married a Filipina and put up the Kitchen after the restaurant where he was chef closed. Pancho passed away on July 14, 1925, and the restaurant did not cease operations until 1941 due to poor business and following a waiters' strike.

According to the American Express guidebook of 1933, “Tom’s Dixie Kitchen is a Manila institution, noted for its excellent food, good orchestra and the fact that it never closes. No matter where you may go you should always end up at Tom’s for some ham and eggs, toast and coffee or any other of the many excellent specialties, before going home. All night and all day, “Tom’s” flourishes and is known all over the Orient.”

When Pritchard died at the age of 81 in 1964, AVH Hartendorp, editor of The Journal of the American Chamber of Commerce of the Philippines recalled:

"I first knew Tom as the Tom's Dixie Kitchen, which was then a small place along the narrow street, off Plaza Goite, which extends from Rizal Avenue and runs into Echague Street. There was only a lunch-counter and a few small tables, with Tom himself, big, black, and smiling, and also handsome, presiding behind the counter and helping to prepare and serve the delicious southern-style American dishes which brought people into the place. Soon the establishment was enlarged until it occupied about a quarter of the whole block on that side of Plaza Goite. On the other corner was the smaller Plaza Lunch, all white tile, which specialized in short orders, but Tom's was the place to eat more leisurely.

"The Dixie Kitchen was almost entirely open on two sides and there were a number of large round-tables reserved for special groups,--government officials and members of the Legislature and the Municipal Board, sportsmen and sports-writers, vaudeville actors, businessmen, with newspapermen generally moving from one to another of the tables.

"Plaza Goite, then, was the center of the town, easily reached from anywhere. The Meralco street-car system had a central waiting-station there. Tom's was a place to meet as well as eat and hours were spent there in talk. It was open night and day and theater and concert goers went there after these affairs for something to eat before going to bed. The place was always full of various celebrities, and soldiers off duty and sailors on shore-leave also would drift in, eating large meals. The price of the regular lunch was one peso! Special orders, for beefsteak, etc. came to more, but prices were still reasonable.

"The place was lively, but always orderly. Torn was almost always there, keeping an eye on the expert cooks and on the scores of waiters, who all were deft and courteous and knew the regulars by name. Tom would sometimes sit down at a table for a while and this was considered a special favor."

While Tom's Dixie Kitchen's habitues probably were boisterous in their celebration of Pancho Villa's victories on the ring, we can also imagine that they seethed with outrage when Pancho Villa was unjustly suspended by the New York Boxing Commission from fighting for eight months in 1924.  We can also see them all--and the nation as well--in great mourning when news that Pancho Villa died a few days after his fight with Jimmy McLarnin in July 1925, and when his remains were interred in the Manila North Cemetery a month later.