For the second time, the parliamentarians on the avenue leading to the Batasan Pambansa did not burn the effigy of President Rodrigo Roa Duterte (DU30). Last year was honeymoon time for the chief executive and the so-called Left. He had appointed leftists to the Cabinet; hence, a cordial mood prevailed on Commonwealth Avenue.

After he delivered his long SONA 2017--scripted and ad libbed--before the joint session of the Senate and the House, the diplomatic corps, and the slick crowd in the galleries, and viewed live on TV by the common people, DU30 surprised the rally crowd by appearing on their entablado. He spoke briefly (around 13 minutes in the YouTube video) but hecklers interrupted him every now and then.


There were two effigies of DU30. The Socialistas, who did not mix with the Bayan (Bagong Alyansang Makabayan) groups, spoke on their own entablado and displayed their DU30 effigy in military camouflage with sidearms, tagged 'pasista' on his cap. Aside from the large hardboard cut-out of DU30 as Hitler look-alike, Bayan also had effigies of the president held by the claws of the eagle Uncle Sam, with Finance Sec. Carlos Dominguez and DND chief Delfin Lorenzana on the side.

One fellow hugged his own democratic space in front of the Batasan, right beside the Bayan assembly. In his placard, he described himself as a 'nuissance candidate' during the last presidential elections. He called DU30 a Hitler. 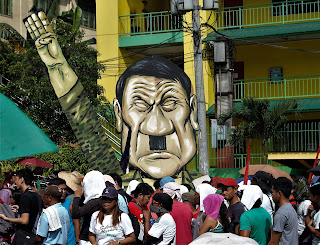 The BlockDuterte group focused on the EJK or tokhang killings. They had sacks of old, junked shoes to display on a large swath of Commonwealth Avenue, past the St, Peter's Church but far from the entablados and red flags of the Socialistas and the Bayan groups. The shoes were intended to represent the missing, the victims of the illegal killings associated with the droga war.

We always tend to gravitate to the lumads participating in protest events in Manila: Lakbayan or the the SONA. The Manobos usually represent the lumads, the schoolchildren and adults with the leaders in their beaded takulong headgear. They lend ethnic color to the mass rallies.


In this SONA, the lumad children brought to the fore their schools. They got the ire of DU30 who threatened to bomb these schools. He did not like the children joining anti-government demonstrations, and he alleged that the schools were illegal, not authorized by DepEd, and were being used for leftist indoctrination.

It was a sunless afternoon altogether with slight showers breaking up huddling groups every now and then. The police just watched the rallying crowd, the anti-riot shields stacked far from the entablados.

The surprise visit of DU30 was preceded by barong clad PSG members surveying the Bayan entablado area while he was delivering his SONA. Nobody suspected that he would be coming down here,. But may be Bayan Secretary Gen. Renato Reyes, Jr. and Saturnino Ocampo knew it before hand. There was an amiable exchange of words between them and the police general while the security survey was being done.

'Nokanshi': the Japanese 'art' of preparing the dead for cremation


We simply had to catch the last two movie features of the Eigai Sai Japanese Film Festival at the Shang Cineplex on EDSA: The Long Excuse/'Nagai Iiwake'  (Miwa Nishikawa,2016) and Departures/'Okuribito' (Yojiro Takita, 2008).  Eigai 2017 is the 20th festival, and in celebration, the Japan Foundation offered 20 films. That means we missed 18. We were in perfect attendance in the previous Eigais.

Death was the underlying theme of the two movies. And incidentally, Masahiro Motoki was the lead actor in both films. He performed characters who had to deal with issues of death in different contextual frameworks.

In The Long Excuse, Motoki is the popular writer Sachio Kinugasa whose wife Natsuko died when the bus she rode with her friend for a holiday in an ski resort crashed into a frozen lake.

The movie delineated how Sachio coped with the loss of his wife of twenty years vis-a-vis his personal and professional circumstances. He stepped into the life the inconsolable husband of his wife's friend and his children, and in the process, all of them were able to move on.

It was not part of the movie, but in real life, Sachio would engage a nokanshi to prepare Natsuko's body for cremation.

In Departures, Motoki is the cellist Daigo Kobayashi who  became a nokanshi in his old town where he and his wife settled down after the symphony orchestra of an urban city was dissolved. He was looking for a job and responded to an ad from what he thought was a travel agency. It was a mortuary; and a typo error indicated a task of attending to  the 'departed' not travel 'departures.'

The closest meaning of a nokanshi is "encoffiner or encoffining master" one who prepares the body before it is laid on the coffin and brought to the crematorium. Japanese law requires cremation, and usually the nokanshi is called while the dead body is still warm.

As depicted in the movie, the family of the deceased watches the process, but the ritual is so practiced and refined that no one will see a bare body even if it is undressed for the donning of new clothes. The face is made up to look alive similar to the picture displayed in the memorial altar. In one scene, Daigo asked for the favorite lipstick of the departed.

Daigo the cellist brought to his job a musician's sense of control. His movements were elegant, almost theatrical, but showed compassion to the departed, and respect for those in grief.

The deliberate carefulness with which he cleansed and clothed the bodies--the transgender, the young girl who died in an accident, the grandmother, the operator of the baths, and his own father--reminded one of the Japanese art of gift wrapping. There was some sense of pattern, for example, in the way the hands were made to clasp together sometimes with Buddhist beads around them. Or, in the way of folding and arranging the sleeves of the kimono on the sides of the body.

Certainly, the movie created some culture shock to the Filipino audience familiar with the business of dying in the country. There is no equivalent of the Japanese nokanshi; everything is left to the funeral parlor.

For his performance in the movie, Masahiro Motoki won four best actor awards in 2009: Asian Film, Japanese Academy, Blue Ribbon and Kinema Junpo. That year, Departures won the Oscar for the Best Foreign Language Film in the 81st Academy Awards, and ran away with ten of that year's Japanese Academy Awards including Best Actor and Best Director.

Women in the Philippine Merchant Marine Academy Class of 2017

The Philippine Merchant Marine Academy (PMMA) Class of 2017 is still male-dominated: of the 216 graduates, 17 are women. They received their Bachelor of Science degrees in Marine Transport (BSMT) and Marine Engineering (BSMarE) during the 196th Commencement Exercises at the Academy grounds in San Narciso, Zambales on 06 July 2017.


Canet and Rubia were in the Top 10 in the MarE program. Rubia was the most awarded of this batch of women graduates. She was presented the Philippine Coast Guard Sword, the 'Iron Woman' award from the Department of Naval Science and Tactics, and Leadership and Discipline Medals from the Department of Midshipmen Affairs.

Samortin, Flores and their classmates entered the Academy through a rigid selection process. PMMA says that about 5% of around 6,500 applicants from all over the country pass the screening and get accepted as midshipmen in two academic programs of their choice: marine transport and marine engineering.

Sandiglayan had four-year residency courses: the first, second and fourth years for academic studies on campus, and the third for a one-year internship training as deck or engine cadets on board commercial vessels plying the international ocean lanes. The fourth, the graduation year, is the professional stage where they learn the additional knowledge and skills to qualify as third mates and fourth marine engineers.

They were all government scholars who enjoyed free tuition, board and lodging, and an assured shipboard training on board international vessels with stipend.

The famous painter Juan Luna y Novicio of Spoliarium fame preceded Sandiglayan by 143 years. He was 17 when he graduated Piloto de Altos Mares (Pilot of the High Seas) from the Escuela de Nautica de Manila in 1874.

The Escuela was established in 1820 and through the years evolved into the PMMA as we know today.

After sailing for thirty months, Luna quit seafaring, even if he was called el marino atrevido (the daring seaman) by his shipmates, and went to study fine arts.

In the case of Sandiglayan, three career paths were opened for them: enlisting with Philippine Navy and the Philippine Coast Guard, and joining the Merchant Marine.

The PMMA stamp virtually assures them 100% employability with  immediate hiring by more than 30 partner international and manning companies of the Academy. Their promising careers include being master mariners, chief engineers, shipping executives, naval or coast guard officers, educators, trainers in maritime-related industries/institutions, etc.


The Philippine Coast Guard has already inducted 22 of Sandiglayan Class earlier on 03 July 2017 as Probationary Ensign, two of them are women.

Valedictorian Samortin and Anchorman Flores are now P/ENS of the Philippine Navy.

"Our graduates," VAdm Richard Ritual, PMMA Superintendent, said, "constantly serve as Ambassadors of Goodwill, for they circle the different parts of the globe on board various international seagoing vessels bringing with them the positive tenets inculcated upon them during their Academy days: Kawastuhan, Kababaang-loob, Kagitingan (Righteousness, Humility, Courage)."

This is the highest number of topnotchers since the university was founded in 1908. To earn the summa distinction, a student must earn a weighted average grade (WAG) between 1.0 and 1.20.

Alumni wonder how easy it seems now to graduate summa. Could it be that there are no more 'terror' professors who can kill aspirations to get grades better than 1.5 in one's subjects? The most plausible is that the wealth of information available to students is within reach of the fingers from the world wide web unlike before when they had to dig into books in the library. Information technology has boosted chances to get to the top of one's classes.

Getting a 1.0 in a subject then was a great struggle. Thus, one gets awed by students who graduate with a weighted grade average (WAG) of just a bit close to that magic number like Williard Joshua D. Jose and Rangel DG. Daroya, who both graduated with Bachelor of Science in Electronics and Communications Engineering (BS ECE) degree from the College of Engineering: WAGs of 1.058 and 1.074, respectively.

Arman Ali Ghodsinia, who delivered the valedictory address, graduated BS Molecular Biology and Biotechnology (BS MBB) from the College of Science, earned a WAG of 1.173.

The 36 top honors came from 10 degree-granting units of the university’s four clusters: science and technology (S&T), social sciences and law (SS&L), management and economics (M&E), and arts and letters (A&L).

This was followed by eight from the SS&L cluster, all coming from the College of Social Science and Philosophy (CSSP).

With the growing number of summas, there may come a time when their acclamation will be confined in the recognition rites of schools and colleges.

I attended a graduation event in the New Hampshire in the US five years ago, and I noted the big number of summa graduates. They were not called on stage; it sufficed that their names in the program were followed by that Latin phrase of distinction.

Note: Unless credited to the UP Diliman Information Office, all the photos are from the author.