It's the centennial of the1912 corn campaign; Emilio Aguinaldo, Jr. had his own corn plot

One hundred years ago, the Bureau of Education inaugurated a general corn campaign in all schools in the country to complement vegetable growing in school and home gardens and the cultivation of farm crops in what were then called settlement schools.  The full force of about 8,000 teachers and other government agencies implemented this corn promotion program.


One aim of the campaign was to "impress upon the Filipino the fact that corn is a food for human consumption."  The American authorities thought that "it was necessary not only to teach the Filipinos how to grow corn, but also to teach them to eat it. Corn is one of the regular crops of the islands, but owing to ignorance and prejudice, corn products were regarded by the Filipinos as food to be despised by all except the lowest classes."
It was also necessary to have other food products supplement rice, the Filipino's main staple. Then, and it is now, rice was already being imported. The Americans felt that it was best to popularize corn so that there would be a reduction in rice imports.  They were thinking that a "considerable loss of public funds secured from the import duty on rice" would be compensated by "the retaining in the Philippines of the several million pesos which annually leave the country for food staples."
The campaign had several components that would be capped by the first large corn exhibition in the Philippines during the 1913 Manila Carnival.
The biggest component was the corn-growing contest among schoolboys.
Contest no. 1 had the boys cultivating corn plots in their own homes. Their teachers evaluated their plots regularly. A prize was awarded to the boy who grew the largest quantity of corn on one hundred square meters of land.
Contest No. 2 was an open competition among the boys who could submit the best five ears from their harvest. For the Manila Carnival corn exhibition, there were 149 five-ears exhibits from various provinces that competed. 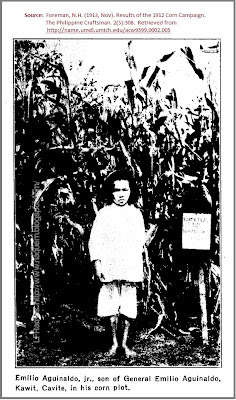 He was not among the winners in Cavite, but Emilio Aguinaldo, Jr. also had his own corn plot to tend during the launching year of the corn campaign in their home in Kawit, as shown by this picture from the Philippine Craftsman issue of November 1913.
While the boys were into corn growing, there were 6,660 girls who were taught corn recipes and they prepared the dishes using only utensils and ingredients found in the ordinary Filipino household.
Corn demonstrations were held in towns and barrios especially during fiestas, garden days (yes, they had Garden Day, Arbor Day then), and even during athletic meets. They had "booths specially constructed for the purpose ... devoted to the display of points pertaining to the growth of corn; good cornstalks with ears; ears of corn; seed testing; preparation of corn meal; and the preparation and serving of corn dishes."


The worst drought, the worst attack of locusts, and destructive typhoons wrought havoc to some parts of the country during this first year.  "A pronounced drought, the worst for many years, was followed by swarms of locusts.  It was the worst locust year during the American administration. Entire sections of the Philippines were devastated. The locust experts of the Bureau of Agriculture, in cooperation with the people, worked hard but in two or three provinces practically all crops were eaten up. In these provinces the boys enrolled in the corn-growing contests had their corn destroyed. Many plots were replanted two and three times. Two or three very destructive baguios caused extensive damage in certain provinces. Buildings as well as corn plots were destroyed. The corn campaign was conducted during a year when there were more than the usual number of agricultural calamities, but the part the campaign played in reducing the want and suffering usually following the destruction of crops cannot be readily expressed in terms of money value."
The corn campaign was discontinued after five years, in June 1916.  The American authorities felt they have attained their objectives. Corn-growing contests continued as part of the activities of agricultural clubs.
After one hundred years, several varieties of corn find their way from farms to markets, corn has become a part of the Filipino cuisine either as veggie ingredient or stand-alone salted or unsalted, buttered or un-buttered staple, sweet yellow corn stalls have become fixtures in the urban Katipunan Avenue landscape, canned sweet corn is almost like a regular item in the grocery list, and pop corn seems like a constant in everybody's equation of an enjoyable time in the movies.
Anyway, when Emilio Aguinaldo, Jr.  was tending his corn plot, West Point was not yet in his dreamscape, we suppose.
References:
Posted by Lib Ramos at 2/22/2012 04:00:00 PM No comments: Links to this post

This may help Filipinos configure their genealogical trees specially if they fail to find some ancestral links before 1850.  Hopefully though, the baptismal and matrimonial records of their hometown Roman Catholic churches are all preserved in microfilm at the Family Research Center of the Church of Jesus Christ of Latter-Day Saints (LDS or Mormons, for short) to help them out.

In our case, the church records of the San Sebastian Church of San Narciso, Zambales are still there on top of the convent shelves, now very brittle and gathering dust, some pages burned by acidic ink or mangled by generations of termites.  Fortunately, these were microfilmed sometime in the ‘60s or ‘70s; thus, we were able to read the extant bautismos, matrimonios and defuntos of the Hispanic period of our town’s history starting from 1849, when the church was built.

However, records of our ancestors when San Narciso was the Ilocano barrio Alasis or Alasiis attached to the Zambal town of Cabangaan (now Cabangan), and was a visita of that parish around 1836-1838 to 1849, are forever lost.

Folk lore tells that our town was formed by settlers from Paoay, Ilocos Norte.  The microfilmed baptismal and marriage records of this town's St Augustine of Hippo Church confirmed that our forebears really came from there.

One thing was clear:  there was no Farin among the surnames of Paoay folks before the Ilocano migration in the 1830s and 1840s to the coastal plain of Zambales between Cabangan town and the barrio that later evolved into Castillejos town.  Into this plain also settled Sur and Norte Ilocanos whose barrios would become San Marcelino, San Antonio and San Felipe.

The name of one woman started our journey of discovery through the Paoay records.  She was our great-great-greatgrandmother, Ana Gonong, who, in the Zambales records, was married to Carlos Farin.

She was born on 24 July 1804.  We stumbled on her other siblings in the Paoay baptismal files--Damiana (23 September 1806) and Andrea (24 November 1811)—and in the matrimonial books—Santiago, Petrona, Francisca and Venancio.   They were children of a well-off couple Don Pasqual Gonong and Doña Pasquala Bernabe who belonged to the barangay of Don Pasqual Concepcion (their names suggest they were baptized on a Sunday that was a Christmas day).

That an Ana Gonong married a Carlos de Dios on 03 June 1822 in the Paoay books jolted our memory to an antique document signed by the cura parroco of Paoay attesting that he baptized Juan de Dios, son of the couple, on 10 Mar 1828.  That document is being kept by an aunt in California who remembers being told by her father, also a Juan, patriarch of our youth, that this de Dios changed his surname to Farin.  They also had an older son, the earliest Juan, who was baptized on 24 May 1823.

Carlos descended from another well-off family, Don Manuel de Dios and Dna Sebastiana Abad.  He was born on 02 November 1803.

One link was finally found:  the Geronimo Farin line to which we belong started from the Carlos de Dios-Ana Gonong matrimony in Paoay, Ilocos Norte.   Carlos Farin and Ana Gonong were listed as abuelos paternos (paternal grandparents) of Geronimo’s children born after 1865 (baptismal records did not have abuelos in the earlier years).

Claveria declared, “[f]amilies who can prove that they have kept for four generations their surname, even though it may be the name of a saint, but not those like de la Cruz, de los Santos, and some others which are so numerous that they would continue producing confusion, may pass them on to their descendants; the Reverend Fathers and the heads of provinces are advised to use their judgement in the implementation of this article.”  The last clause suggests why not all the de Dios in San Narciso at that time switched to Farin.


When we found Andrea and Francisca Gonong, we remembered that these names are in two other Farin lines in our town, both of which we were able to establish as both Eugenio on the paternal side, finally configuring relationships through the church records of San Narciso and Paoay.

It baffled that there was only Francisca in the Eugenio family line before 1849.  She married Modesto Eugenio, son of another well-off couple, Don Manuel Eugenio and Doña Paula Evangelista in the Paoay records, on 11 April 1842.  When Manuel was born to Modesto and Francisca in San Narciso, he was baptized Manuel Farin Eugenio on 27 July 1851.

Ana could have convinced Modesto Eugenio and her sister Francisca to adopt their new Farin surname as well even if the Eugenio surname was not in the banned list or those that were “so numerous.”  Could  Ana and Francisca have contrived to perpetuate their sisterhood by this new surname?  During the Spanish regime, men and women carried their given names to the grave; women did not assume their husbands’ surnames.  Ana and Francisca could have thought then that their Gonong link would be preserved among future generations through their common stamp, the Farin surname.

“In the lists that will be made for the cabecerias, in order to complete the register later,” the Claveria decree stated, ”each person shall indicate (a) his baptismal name, followed by the new surname which may be assigned to him, and (b) the name which, until then may have served him as surname, leaving him free to retain this as long as he wishes.”

The Eugenio and the de Dios surnames were not retained for long.


It was under the regime of Gov. Gen. Narciso Claveria that the Ilocano barrios of Cabangan were constituted into a new town in 1846, and it was also under him that many genealogies were altered because of his 1849 decree urging for the change of surnames.

Thus, there exists today kinships on nominal terms (sharing the same surname) or on true bloodlines. In this story, we have gone as far as tracing the Gonong roots.  We have yet to flesh the Eugenio and De Dios sides of the big Farin umbrella.